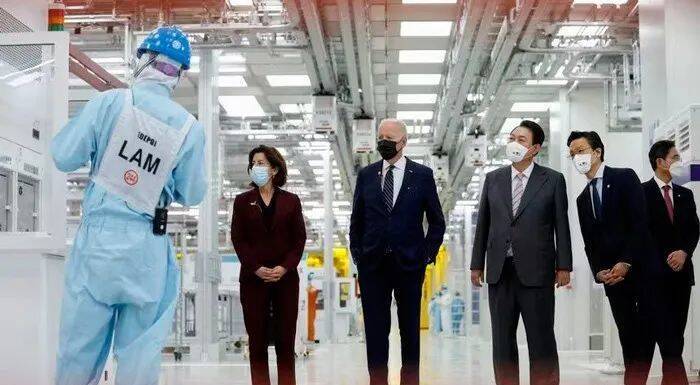 On March 31, 2021, US President Biden announced a US $2 trillion infrastructure investment plan and announced that US $50 billion would be allocated to bring the US semiconductor industry back to domestic production.

Two bills presented in 2020, the American Foundries Act of 2020 (AFA) and CHIPS (Creating Helpful Incentives to Produce Semiconductors) for America, are expected to fund US $37 billion for the semiconductor industry. But President Biden has increased it significantly this time.

In a statement to the press, the White House said, “President Biden believes we need to meet today’s challenges and seize tomorrow’s opportunities by developing and manufacturing technology and products in the United States. I am convinced that the President will give Congress $50 billion to dedicate the U.S. Department of Commerce to overseeing domestic manufacturing capacity and injecting funds to support the manufacturing of critical products.

The background to President Biden’s proposal this time is that TSMC and Samsung Electronics, the two largest semiconductor makers in Asia, are expected to widen their lead in the semiconductor industry in 2021. According to a research report released in March 2021 by US market research firm IC Insights, Samsung and TSMC’s combined capital spending in 2021 is expected to reach at least US$55.5 billion. That one year alone would exceed the US$50 billion proposed by President Biden. In addition, the amount of investment by both companies is expected to increase over the next few years.

More than 70 years ago, the United States made all the world’s semiconductors, but today accounts for just 12% of global production, according to the Semiconductor Industry Association (SIA).

The White House claims that promised subsidies have already led to $44 billion worth of new investment.

The bill has already helped encourage smartphone chip designer Qualcomm to spend $4.2 billion on chipmaker GlobalFoundries to build processors, the White House said in a fact sheet released on Tuesday. Micron will also invest $40 billion in memory chip manufacturing capacity, the White House said. This could boost the US share of memory chip manufacturing from 2% to 10%.

IT companies and automakers at one conference

In the discussion to solve the semiconductor supply shortage, not only semiconductor companies such as Intel, Google, Dell, TSMC in Taiwan, and Samsung in South Korea, IT companies, but also automobile manufacturers such as General Motors and Ford participated (Tesla was not invited).
The White House side was attended by Sullivan, National Security Advisor, Secretary of Commerce Raimond, chaired by Economic Council Chairman Deeds, and briefly attended by President Biden.
As mentioned above, the main agenda is to solve the shortage of semiconductor chips and rebuild the semiconductor supply network.

In February, newly inaugurated President Biden signed an executive order to strengthen the semiconductor supply chain. The presidential decree stipulates that the supply chain for not only semiconductors but also rare metals will be reviewed in 100 days.

“Semiconductor shortages are slowing the production of cars and affecting American workers,” President Biden said at the conference. This refers to the EV/auto industry in the short term. In fact, GM has newly learned that eight assembly plants have been temporarily closed since April 8 (some are scheduled to reopen). Ford has also closed some plants.

Automakers have announced how the semiconductor shortage will affect their 2021 earnings. If there is a shortage of supply until the first half of 2021, even considering the production compensation in the second half, sales will fall by $1 billion (about 110 billion yen) to $2.5 billion (about 273 billion yen), and this year’s production volume will be 130. There is a possibility that there will be a shortage of 10,000 units.

More than 100 semiconductors are used in automobiles, not only for so-called infotainment (for example, functions that connect to mobile devices) but also for power steering and braking systems. When it comes to EVs, this number will increase further, including not only power management systems but also automatic driving.

GM announced in March that it would produce some pickup trucks without using semiconductor modules to improve fuel efficiency. The shortage of semiconductors is hurting automakers.

The Biden administration heard directly from industry leaders about the impact of these semiconductor supply shortages and discussed how to deal with them in the short and medium term. As evidenced by the presence of an adviser in charge, it also seems to have a lot of national security and Chinese influence considerations in mind.

In an interview after the conference, Intel CEO Pat Gelsinger said, “The White House and Congress are aggressively doing more domestic manufacturing, research and development, and hiring efforts to support the semiconductor industry.”

Taiwan’s TSMC, the world’s largest contract chipmaker, is being invited because it plans to build a $12 billion factory in Arizona this year. 5nm process chips will be manufactured here. TSMC also issued a statement after the meeting: “We are confident that the Arizona factory will succeed under the partnership with the US government.”

The restructuring of the US semiconductor supply network is expected to progress rapidly.

All Year Cooling-Wise choice to make