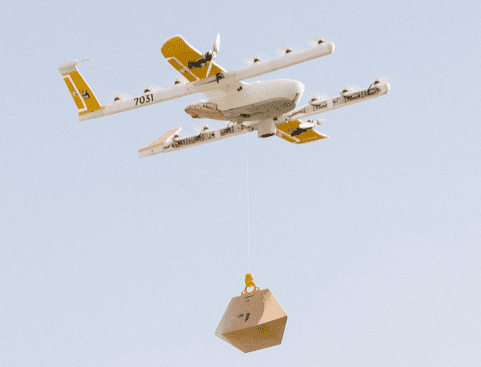 Wing is a subsidiary of Alphabet Inc., which works with the technology to develop drone-based delivery of freight. The company completed its first real-world deliveries in 2014. They have built delivery drones and navigation systems that can deliver small packages directly to homes in minutes. They use an Uncrewed Traffic Management (UTM) system to help drones navigate the skies safely. Wing is an autonomous delivery drone service aiming to increase access to goods, reduce traffic congestion in cities, and help ease the CO2 emissions attributable to the transportation of goods.

Wing’s primary launch customer is Walgreens, which will deliver health and wellness products directly to customers’ homes. For that, it will use a new operational model where drones are staged at one of its own store parking lots rather than a Wing facility. It will also be delivering ice cream from Blue Bell Creameries, Easyvet prescription pet medications (yep), and first aid kits from Texas Health.

Walgreens is a bit different from others as they handle all the steps of operations by themselves . This makes it America’s most scalable drone delivery operation to date, as they have planned to process their own orders and load packages onto drones themselves—while Wing oversees the delivery from a remote location.

The work is very organised as the aircraft arrive in small containers that serve as tiny hangars, allowing each store to quickly and easily deploy a small, dedicated fleet from its parking lot, on its roof, or in small spaces adjacent to the building.

Wing uses a hybrid multi-rotor/fixed-wing drone designed by them on their own. They are capable of carrying packages no heavier than 1.5 kg (3.3 pounds) and can cover round trips up to around 10 km (6 miles) away. The drones are autonomous and usually run on autopilot but are monitored by pilots who can take control if something goes awry. There are redundant motors, batteries, and navigation systems to help prevent accidents.

Wing has been doing drone deliveries in Australia (its launch market) since early 2019, and started making drone deliveries in the US later. The company has evidently informed the media that it has made 200,000 real deliveries to date but also accepted that all of those were largely done in smaller communities, so this city launch is a big deal for the company . This is surely going to be an important milestone for Wing and drone delivery in the US.

The Wing is focused on their work, and this can be seen in their growth, as in the first quarter of 2022, they completed over 50,000 commercial deliveries. which is more than three times year over year. The eye-opening rise in the numbers came just weeks after Wing launched drone deliveries in Texas, serving the Dallas-Fort Worth suburbs of Frisco and Little Elm. Texas joins Wing’s other US operations in Virginia, along with drone deliveries in Vuosaari, near Finland’s capital Helsinki, and two locations in Australia. This could only be possible because of the quality of the drones they are using. Wing’s 1.3m-long drones can fly at up to 65mph and carry 1.2kg payloads up to six miles. The company operates “nests” at the sites of delivery partners, including Walgreens, KFC, and others.

As of March 1, 2022, Wing had made a total of 200,000 drone deliveries world-wide – so racking up 50,000 in three months suggests the Google drone spin-off is seeing significant growth. It took Wing three years to hit 100,000 deliveries in August 2021, and just seven months to double that number.

The growth they are experiencing doesn’t mean they haven’t had any setbacks. Even Wing deliveries have faced turbulence with residents in Australia as they complained about the noise of the drones – including one unfortunate resident of Logan, Queensland, who claims to be on the flight path for drone deliveries, but can’t use the service themselves. To overcome the noise complaints, Wing proposed developing quieter drones. Wing also has a competitor giving it tough competition, and that is Amazon, but still Wing is soaring high. There are many who have tried and are still trying drone delivery systems so far, but as of October 2021, Wing and UPS were the only two companies with a full licence to operate delivery drones in the US. In the UK, the CAA has licenced 10 companies to operate drones out of sight of the operator, and the government has indicated the CAA should work with new operators to grant them licences.

Wing is actually taking care of many of the things which make it different from others. It has full emphasis on its commitment to safety, and they don’t believe in any hush-hush things. They are quite fine about taking a slow-and-steady approach, adding delivery areas one at a time. This allows it to deal with problems such as noise, dog-scaring, and even bird attacks.

The companies that have intiated drone delivery systems are facing many problems and are often criticised, but everything in this world will have its pros and cons. So, let’s focus on the pros more as they can help deliver the products quickly to virtually any location. It also improves time management for all parties. Delivery drones, for sure, conserve energy. It is a technology that helps us to save time as well, and time is the most precious thing you can store. Delivery drones offer a safer delivery system, and they would offer a higher level of efficiency. Delivery drones could reduce consumption levels as less human capital will be engaged and transportation can also be avoided.

How Can Your Startup Benefit from WhatsApp Business API?

The future of Pharma franchising in India